Find traditional instrumental music
This is the stable version, checked on 5 May 2022.
Jump to: navigation, search

Back to Old Truagh

OLD TRUAGH (Sean Truag). Irish, Slow Air (3/4 time). E Minor (O'Neill): F Sharp Minor (Bunting, Clinton). Standard tuning (fiddle). One part (Bunting, Clinton, Heymann): AB (O'Neill): ABB' (Bunting/1796). The air (which begins in the relative minor and ends in the major) was published by Belfast musician and collector Edward Bunting in his Ancient Music of Ireland (1796 & 1809), collected from the County Leitrim harper Charles Byrne (1712-c. 1810), who had played it at the Belfast Harp Festival, as recorded by the Belfast Northern Star of July 15, 1792, whose correspondent was in attendance at the competition between ten harpers held that week. As "Ye Trugh" it had previously been published in Dublin by the Neals in 1724. Modern harper and harping researcher Ann Haymann (1992) says the melody was quite popular, with many instrumental and vocal variants.

Byrne was Bunting's source for several Carolan tunes, and had a wealth of stories. Arthur O'Neill (1734-1818), a blind harper who also played at the Belfast Harp Festival and who was one of the last of the old itinerant harpers, mentions the tune in his memoirs. As a young man he toured Ireland several times and related meeting other famous harpers: 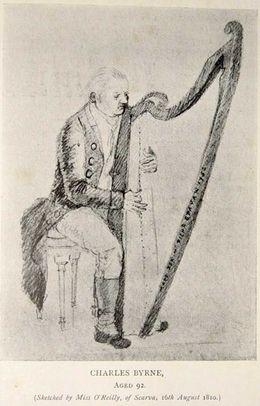 I met a Charles Byrne, who was taught by his uncle to be a harper. I may be thought too severe when I made use of the word 'tol-lol' in my account of the Irish harpers. Others may say the same of myself, but the fellow, not being blind, had many advantages over those who had not that first of gifts, sight, and as he had a tolerable memory he could recount all that happened to him during the time he led his blind uncle through the Kingdom, and I must conclude my biography of him and set him down a tol-lol (i.e. a so-so or mediocre player). I know myself, besides what I am creditably informed, that he could [play] and sing a good variety of real Irish songs in a pleasing style with a pleasing voice.

Back to Old Truagh