OLD WOMAN IN THE GLEN [2], THE. Irish, Reel. G Major. Standard tuning (fiddle). AABB. Composed by flute player Vincent Broderick, originally from Bullaun, north of Loughrea, County Galway. The title refers to a incident over half a century ago when Broderick was out with friends on a Christmas mumming trip. They were returning from a tour of the countryside when they noticed a light in a small cottage across a field, and decided to make one last visit thinking that some person might still be awaiting visitors, as was the custom. They were greeted by a barking dog and an old woman at a half-door who told them she had been waiting since day-break for visitors, but no one had been to see her. She invited the party in to Christmas dinner, an invitation they took up, during which Broderick noticed the numerous pictures of family on her walls, all of whom had emigrated to America. She was the last and alone. Soon after this the newspaper reported she had been found dead, and Broderick wondered if they were the last to see her alive (Vallely & Piggot, Blooming Meadows, 1998). 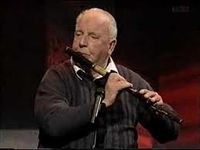