Back to Ole Bull Hornpipe[edit]

OLE BULL HORNPIPE. American, Hornpipe. F Major. Standard tuning (fiddle). AABB. The tune is named for the Norwegian violinist Ole Bornemann Bull [1] (1810-1880). After a precocious start Bull, inspired by Pagannini, debuted in Paris in 1832, but did not receive critical acclaim on the European concert stage due to his rather amateurish technique. What he lacked in formal training, however, he made up for in his confidence and ability to self-promote, and managed to perfect a style that was pleasing to the public; he therefore had a prosperous career playing for audiences in areas which rarely heard real artists. He performed in the United States in 1843 and returned four more times to North America to concertize, playing mainly his own compositions and Norwegian folk music. There exists a large bronze statue of Ole Bull playing his fiddle in Loring Park in Minneapolis, Minnesota, showing the influence not only of Bull but of thousands of Scandinavian immigrants to the region. In 1852 he attempted to found a Norwegian settlement in Pennsylvania along socialist lines, called Oleana [2]; it was a disaster. 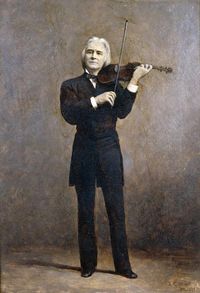 Elias Howe (c. 1867) prints contra-dance directions along with the tune.

Back to Ole Bull Hornpipe[edit]