Back to Omnia Vincit Amor[edit]

OMNIA VINCIT AMOR. Scottish, Air (3/4 time). "Omnia Vincit Amor" is a phrase from Virgil's Eclogues (X.69), meaning 'love conquers all'. "The Prioress in Chaucer's 'Canterbury Tales', most inappropriately, wore this engraved in gold on her bracelet" notes Robin Williamson. One set of words to the tune, called "As walking forth" from Johnson's Scots Musical Museum, vol. 6 (reprinted in Chambers' Songs of Scotland, 1830, pp. 294-95) begin: 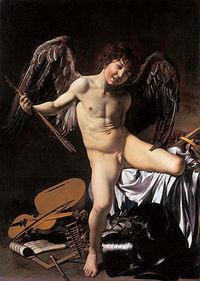 As I went forth to view the spring,
Which Flora had adorned
In gorgeous raiment, everything
A winter's rage outscorned;
I cast mine eye, and did espy
A youth that made great clamour,
And, drawing nigh, I heard him cry,
Ah, Omnia vincit amor!

The same burden ends each stanza. William Chappell (The Roxburghe Ballads, vol. 6, 1889, p. 218) notes the tune was also early known as "The Damaske Rose," while a later name was "So sweet is the Lass that loves me" (from Martin Parker's ballad "Love's Solace"). He also finds a Roxburghe Ballad "entitled "The Last Lamentation of the Languishing Squire; or, Love overcometh all Things;" to the tune of (1) "Billy and Molly" or (2) "Jockey's Jealousy"...It seems probable that other names of the same tune were 'Mock-Beggars' Hall', and 'Is not this your Northern Nancy?'" (the latter probably the first line of the ballad "Northern Nancy"). Allan Ramsay published a version of the "Omnia vincit amor" lyric in his Tea-Table Miscelany (1724) as "As walking forth to view."

A melody by the name "Omnia vincit amor" appears in the Skene Manuscript (c. 1630), and it is thought (by Stenhouse) that the original ballad predates this, perhaps prior to the year 1600. Other tunes used for the various "Omnia vincit amor" lyrics were published by James Oswald (Caledonian Pocket Companion, Book 8, 1760), and James Johnson (Scots Musical Museum vol. 6, 1803), but they are thought to be later airs.

Back to Omnia Vincit Amor[edit]