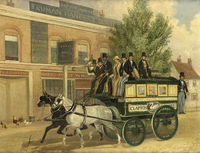 An 'omnibus' or horse-bus [1] was a large horse-drawn enclosed carriage, with seating both inside and outside. It was a popular means of transportation in 19th century cities, with the first London line opening in 1829, although the first line in England was located in the city of Manchester, and predated the larger city by five years. In James Hill's locale, omnibuses were first established to run between Newcastle and Tynemouth in May, 1833, which perhaps helps to date the tune.