On a May Day Morning Early

Back to On a May Day Morning Early[edit]

ON A MAY DAY MORNING EARLY. English, Air and Jig (6/8 time). G Major. Standard tuning (fiddle). AB. A popular 19th century song air and country dance tune that appears in numerous songsters, with various sets of lyrics but usually with the burden: "On a May day morning early." This lyric was printed by John Diprose in his Diprose's modern song book; comic and sentimental (1857): 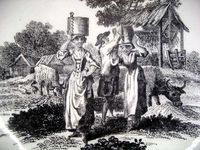 Back to On a May Day Morning Early[edit]