On the Lake of Killarney

Find traditional instrumental music
This is the stable version, checked on 10 November 2022.
Jump to: navigation, search

Back to On the Lake of Killarney

ON THE LAKE OF KILLARNEY. Irish, Air (6/4 time). G Major. Standard tuning (fiddle). ABCA. The song "On the Lake of Killarney" is by musical composer and conductor at Vauxhall Gardens, James Hook (1746-1827), for his operatic farce Double Disguise (1781) performed at the Theatre-Royal in Drury Lane. The libretto was written by Elizabeth Madden, who became Hook's wife. The music for the song may or may not have originated with Hook, as it was common at the time for composers occasionally to adapt and arrange existing music for their operatic works. 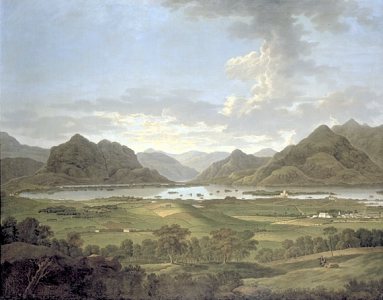 View of the Lake of Killarney from the Park of Kenmare House, by Jonathan Fisher (d. 1809)

Verse:
And his hair was so red and his eyes were so bright,
Oh they shone like the stars in a cold frosty night.
So tall and so strait, my dear Paddy was seen,
Oh he look'd like the fairies that dance on the green,

All the girls of Killarney wore green willow tree,
When first my dear Patrick sung love tales to me,
Oh he sung and he danc'd and he won my fond heart,
And to save his dear life with my own I would part.

Back to On the Lake of Killarney