Back to One-Step a Marie[edit]

ONE-STEP A MARIE (Mary's One-Step). Cajun, One-Step (4/4 time). USA, Louisiana. D Major. Standard tuning (fiddle). AB(Vocal)BABA(Vocal)ABABAB. According to Raymond Francois (1990), the one-step was a rare dance for the Cajun community. Francois' father said the first time he saw the one-step danced was about 1916, when it was performed to the then-popular wartime song "It's a Long Way to Tipperary." The tune was recorded in San Antonio, Texas, for the Vocalion label by they family group Breaux Freres [1], consisting of Louisiana musicians Amédé on accordion, Ophé (Ophy) on guitar, and Cléopha (Clifford) on guitar. Amedée Breaux was born on September 1, 1900 north of Rayne, Louisiana, near a community called Robert’s Cove. His father, August Breaux, later moved to north of Egan, Louisiana where he farmed. Amedée started playing the accordion when he was 12 years old and was playing house parties at the age of 14. 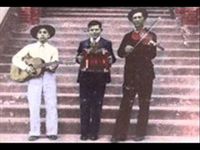 Back to One-Step a Marie[edit]