ONE AND ALL. Cornish, Air. C Major. Standard tuning (fiddle). AAB. Onen hag Oll, One and All, is the motto of the County of Cornwall and is said to date to the Crusades. The story is that the Duke of Cornwall was captured by Saracens and held to a ransom of 15 bezants. When the populace of the county heard the news the “whole of the population” subscribed for his return, and the 15 bezants are represented by the 15 balls in the shield of the Cornish arms, and the motto “One and All,” as ‘’all’’ subscribed. The original air is thought to have been an old Cornish country song, composed by a lady residing near Bodmin, and the music is frequently adapted to local verses.

Set as a march it became the regimental march of the 32nd, the Duke of Cornwall's Light Infantry [1], prior to 1881. Verses were set to the tune by Colonel Bridges Willyams, who commanded the Royal Cornwall Rangers Militia in the early part of the year 1811 when they volunteered to a man to serve in Ireland against Napoleon's threat of invasion. Impressed, the King made the unit a light-infantry regiment. [c.f. The National Review, vol. 13, 1889, p. 336]. The military lyric begins: 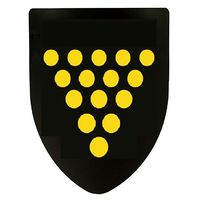 Away, brave boys to Dublin jig,
The girls to kiss, the whisky swig,
And each as merry as a grig,

But he that will not with us jog,
Shall kiss no girls and drink no grog,
For that he is a sorry dog,

Chorus:
Then let the bells of Dublin ring,
The Cornish boys are come to sing,
With Irish lads God save the King,