ONTARIO SWING. Canadian, Reel (cut time). D Major. Standard tuning (fiddle). AA'BB'. Composed by New Brunswick fiddler Ned Landry, born in Saint John in 1921. Landry joined Don Messer & The New Brunswick Lumberjacks in the mid-1930's, doing dual duty on harmonica (his first instrument) and fiddle. When Messer left the group to go to Charlottetown, Landry took over leadership of the group and remained in that capacity for many years. In 1992 Landry received The Order of Canada for his achievements. 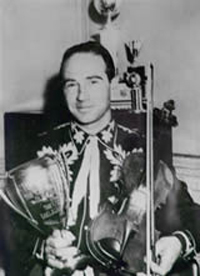