Back to Orange Blossom Special[edit]

ORANGE BLOSSOM SPECIAL. Bluegrass, Breakdown. USA. A Major. Standard tuning (fiddle). AAB + vamp. "One of the most popular fiddle tunes in modern history" (C. Wolfe, Devil's Box, Dec. 1982). Composed by Ervin T. Rouse (1917-1981) around 1938, inspired by the railway train called the Orange Blossom Special's christening and inaugural run (from Miami to New York). The Encyclopedia of Country Music [2012, p. 440] gives that Rouse originally called the tune "South Florida Blues," and later changed the name to "Orange Blossom Special." He recorded it with his brothers for Bluebird records in 1939 but copyrighted it in 1938. 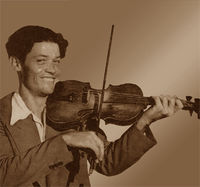 Co-authorship is often credited to Florida fiddler Robert Russell "Chubby" Wise (1916-1996), although the copyright is in Rouse's name, supposedly due to Wise's assertion that 'there was no money in fiddle tunes and that Rouse could copyright it himself, for all the good it would do' (Wise drove a cab at the time). Wise himself maintained that he and Rouse were at the Jacksonville Seaboard Railroad Station when the train came through on its maiden run from Miami. Rouse suggested that they write a tune and Chubby agreed. The two went back to Wise's house and wrote the piece in forty-five minutes, while his wife cooked them breakfast. The tune was recorded by Ervin and his brother Gordon in New York in June, 1939, but the tune did not become a hit until Bill Monroe's recording of it in 1942 (with Art Wooten on fiddle). The very first sound recording, however, appears to be that by fiddler Tommy Magness, who recorded "Orange Blossom Special" with Roy Hall's group in 1938. It was unissued at the time, says Jim Nelson, perhaps to avoid legal problems with Rouse and his record company, RCA Victor. Nelson thinks Magness probably learned the tune directly from Rouse, but that he definitely taught it to Wooten. Magness is credited with popularizing the melody and introducing the famous double-shuffle into the tune. There is a persistent folklore that Wise or Magness lost their rights to "Orange Blossom Special" in a poker game. c.f. Randy Noles' book Fiddler's Curse: The Untold Story of Ervin T. Rouse, Chubby Wise, Johnny Cash, and The Orange Blossom Special.

Back to Orange Blossom Special[edit]