Back to Oranges and Lemons[edit]

ORANGES AND LEMONS. English, Country Dance Tune (2/2 time). D Major. Standard tuning (fiddle). ABB (Karpeles, Raven, Sharp): AABB (Fleming-Williams): AA'BB (Barnes). :The tune and country dance directions for "Oranges and Lemons" date to 1665 when it was published in the third edition of John Playford's Dancing Master [1] (London). It was retained through the eighth edition of 1690 (published by son Henry Playford), after which it disappears from the long-running Dancing Master series. The dance directions are labelled a Round, but it is really a 'Square-eight'--the prototype of the contre-danse, Quadrille and Lancers, notes Cecil Sharp (Musical Times, January 1, 1916, p. 24).

A period nursery rhyme and play-party song called "Bells of St. Clements," a play at rhyming upon the names of London churches with bell-towers, contains the lines: 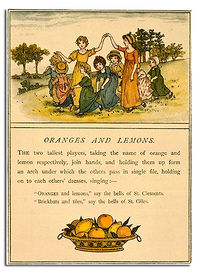 Folklorist Steve Roud finds the earliest version of this lyric in Tommy Thumb's Pretty Song Book (1744), much later than Playford's "Oranges and Lemons." Roud says the words have been interpreted various ways, "usually on the basis of less than reliable evidence." According to Albert Jack (Pop Goes the Weasel: The Secret Meanings of Nursery Rhymes, 2009) There are two churches named Saint Clements:

It could be Saint Clements Church in Eastcheap, on the grounds that it is located close to the docks (Saint Clement was the Roman patron saint of sailors) where cargoes of citrus fruit (oranges and lemons) often arrived from the Mediterranean. It is recorded that the bells of Saint Clements would ring as each ship arrived at the dockside, filled to the gunwales with fruit. The church of Saint Clement Danes in Westminster would appear to have an equal claim, however, also situated near the docks. According to Charles Dickens in The Pickwick Papers (1836-37), porters, having collected their fruit from the wharf, would use the churchyard as a shortcut and paid a toll to the church in return for carrying their oranges and lemons to Clare Market nearby. Saint Clement Dances takes this claim seriously enough to play the "Oranges and Lemons" melody on a daily basis and each year holds a special "oranges and lemons" service.

Back to Oranges and Lemons[edit]