Ord of Caithness (The)

Back to Ord of Caithness (The)

ORD OF CATHNESS, THE (An t-Ord Gallach). Scottish, Reel (whole time). G Major. Standard tuning (fiddle). AABB. Ord of Caithness The Ord of Caithness is "an abrupt, broad, lofty, granite mountain overhanging the sea, on the mutual border of Sutherland and Caithness," now in the Highland council area of Scotland. In the early 19th century the only way by land to Caithness was by a road that traversed the crest of the Ord, a road that was so high and had such sheer precipices as to frighten travelers. A new road by Telford, with somewhat more gradual gradients, was built between 1808 and 1812 but still was remarked upon as a peril. There were other dangers as well, as recorded by James Calder in Sketch of the Civil and Traditional History of Caithness from the Tenth Century (chapt. IX): 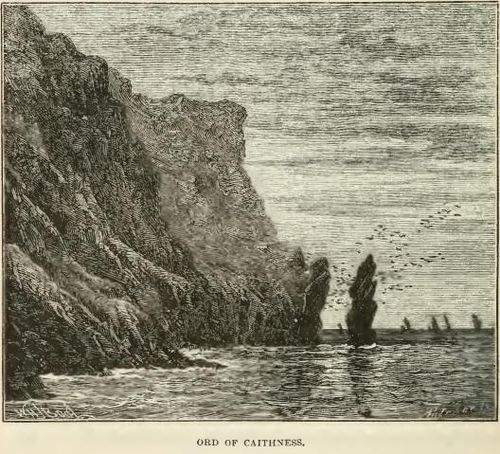 During all this time the peasantry of the county were in a most wretched condition. Among other evils, Caithness was overrun with thieves. In 1617 a regularly organised band of these vagabonds infested the borders of Sutherland and Caithness, where they waylaid and robbed travellers, and violated every unprotected female that had the misfortune to fall into their hands. Their principal haunt was the Ord of Caithness, a spot peculiarly adapted for their purpose. Scarce a week passed without the commission of some murder, rape, or robbery, in that quarter... A strong posse of armed men were sent out to watch the movements of the gang, and to apprehend them. In a few days nearly the whole of the miscreants were seized and imprisoned, and after a summary trial sentenced to the gallows. A gibbet was erected on the highest part of the Ord, where, without benefit of clergy, they were all hanged as a terror to evil-doers.

Back to Ord of Caithness (The)