Back to Oscar Woods' Jig[edit]

OSCAR WOODS' JIG. AKA - "Oscar's Jig." English, Jig. G Major. Standard tuning (fiddle). AABB. Oscar Woods was a melodeon player from Benhall Green, near Saxmundham, Suffolk, who was first inspired to pick up the instrument as a farmboy when he heard an old farm worker, 'Tiger' Smith, play. When Woods was older he and Tiger became playing partners in local pubs, where he also learned from other melodeon players, in particular the Seamen family of Darsham. 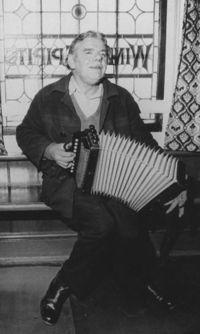 Source for notated version: from Oscar Woods, recorded by Tony Engle in 1973, via John Kirkpatrick's recording from English Choice [Callaghan].

Back to Oscar Woods' Jig[edit]