OSSIAN. Scottish, Slow Air (4/4 time). F Sharp Minor. Standard tuning (fiddle). AAB. The elegiac air was printed in fiddler-composer J. Scott Skinner's Scottish Violinist (1900) and Harp and Claymore Collection (1904), and included in his section of "Pastoral Melodies and Heroic Airs." It was composed by Skinner himself, in homage to the legendary Celtic bard Ossian, son of Fionn mac Cumhaill (Finn McCool), who was said to have lived around the 3rd century A.D. Poetry ostensibly written by Ossian [1] was published in the early 1760's by James Macpherson (1736-1796) of Kingussie, Inverness-shire, who claimed to have copied the poems from original manuscripts, which he declined to produce. 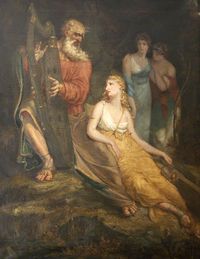 Ossian and his poetry, while perhaps based on folklore, are now thought to have been largely fashioned by Macpherson, and has been called "the most successful literary falsehood in modern history."