Back to Ossian's Hall

OSSIAN'S HALL (Mùr Ossian). Scottish, Reel or Country Dance Tune. A Mixolydian. Standard tuning (fiddle). AB (Surenne): AAB (most versions). Composed by Daniel Dow (d. 1783) of Kirkmichael, Perthshire, and first published in his c. 1775 collection (p. 10), though a notice appears in the November and December numbers of the Edinburgh Magazine and Review for 1773 which contains the tune along with "Athol House," with a footnote appended saying, "Inscribed to Sir James Clerk of Pennycuick 'Ossian's Hall' a new country dance composed by Mr. Dow. This piece and the former by the same composer are inserted at his desire." Dow was a contemporary of fiddler-composer Niel Gow (1727-1807) in whose Fourth Collection (1800) the melody appears without composer credit. 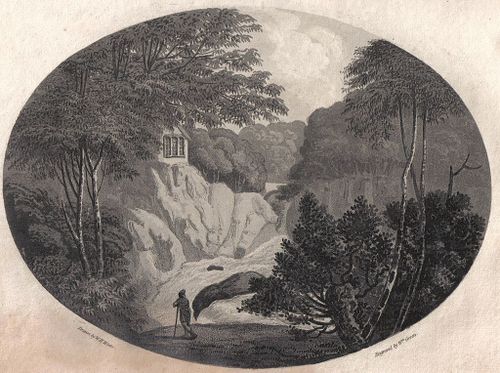 Ossian's Hall in Dunkeld, c. 1800, by Walter Henry Watts, from Garnett's tour of the Highlands & the Western Isles.

Ossian's Hall is the name of a summerhouse, "a romantic Georgian Folly," built in 1758 by the Duke of Atholl in a scenic spot in The Hermitage. It overlooks the River Braan, near Dunkeld, and gives views to the Black Linn waterfall. Originally, simply a rustic structure, it was rebuilt in 1783 (the year composer Dow died) as a shrine to the blind bard, Ossian, a legendary 3rd century bard. The redecorated house had mirrors on the walls and ceilings which reflected the water, forming an optical illusion of water flowing in 360 degrees. Unfortunately, if fell into disrepair and was destroyed in the 19th century, although it has been restored in modern times, alas, sans mirrors. An 1829 travelogue by Gershom Cumming reports:

The greatest curiosity of Dundeld, at least that which is generally esteemed as such, is the cascade formed by a fall of the Bran, about half a mile from the ferry. The manner in which this is presented to the spectator, has been much reprobated by several of our modern touristsm who, anxious to shew their taste for the beauties of nature, hastily condemn the smallest interference of art. For my own part, I entirely differ from them respecting the cataract of the Bran at Ossian's Hall: I consider it as one of the most ingenious and pleasing ornaments of natural scenery I ever beheld. A hermitage, or summer-house, is placed forty feet above the bottom of the fall, and is constructed in such a manner that the stranger, in approaching the cascade, is entirely ignorant of his vicinity to it, being concealed by the walls of this ediface. Upon entering the building, you are struck with the painting of Ossian playing upon his harp, and singing the songs of other times. The picture, as you contemplate it, suddenly disappears with a loud noise, and the whole cataract foams at once before you, reflected in several mirrors, and roaring with the noise of thunder. It is hardly possible to conceive a spectacle more striking.

Back to Ossian's Hall