OSTINELLI'S REEL. AKA – "Austin's," "Ostinella Hornpipe/Ostinella Reel." American, Reel or Hornpipe. A Major. Standard tuning (fiddle). AABB. This melody is named for a popular late 19th century stage violinist named Louis/Lewis Ostinelli, an Italian who arrived in Boston in the year 1818, and became a conductor of the Handel and Haydn Society and helped found the Boston Philharmonic Society (originally Gottlieb Graupner's Philharmonic Society); he also was the first violinist in both orchestras. He married renowned Boston pianist, organist and teacher Sophia Hewitt, and their daughter, Eliza (1824–1896), married Italian cellist Count Biscaccianti and became one of the prominent prima donnas of Europe. The couple separated around 1830. Michael Broyles references the musician in his book Music of the Highest Class: Elitism and Populism in Antebellum Boston: 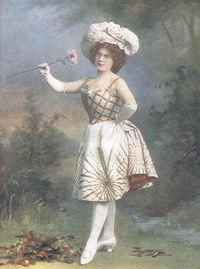 He was keenly aware of the reputation the violin had as a vernacular instrument in new England. According to several anecdotes, he was furious when his violin was referred to as a fiddle or when he was requested to play dance music. Once when asked by a lady if he was to play for a dance following a concert, he deliberately cut his violin strings and said 'Veree story, veree story, madam, you see I can no play.'

It is thus somewhat ironic that his lasting musical fame appears to be in this reel and "Souvenier de Venice Hornpipe," printed in Ryan's Mammoth Collection/Cole's 1000, for many years the primary texts for those "vernacular" fiddlers in the United States. "Ostinelli's Reel" has some currency among modern Texas-style players after being included in the repertoire of influential fiddler Benny Thomasson, among others. John Hartford finds that a melodic fragment appears as a part in the tune "Grey Eagle." Parts of the melody shift into third position on the violin. As an example of how tune titles can become garbled in oral transmission, it appears on a recording by Timmy Cronin under the title "Austin's" on his 1950s Avoca recording ‘Irish Accordion’.


Source for notated version: "Recollections of a Busy Life", a 1938 typewritten manuscript by New Hampshire fiddler John Taggart (1854–1943), entitled "Recollections of a Busy Life" (New Hampshire Historical Society, Concord, N.H.). Taggart wrote in his ms. that the tunes "were all taught me during my boyhood days in Sharon (N.H.), by the various fiddlers in that vicinity" [Miller]. Miller points out that Sharon is in "the heart of the Monadnock Region of southwestern New Hampshire, where fiddlers and contra dances abound to this day" (pref. iv) [Miller]; New Hampshire Fiddlers' Union [Phillips]; New York fiddler John McGrath (d. 1955) [O'Malley]; Tyler Hagood [Silberberg].