Find traditional instrumental music
This is the stable version, checked on 6 September 2022.
Jump to: navigation, search

Back to Otter's Holt (The)

OTTER'S HOLT, THE (Poll an madra uisce). AKA and see "Aughdarra (The)," "Otter's Den (The)," "Otter's Hole (The)," "Water Dog's Hole (The)," "Water Hole (Th)," "Windy Lane (The)." Irish, Reel. B Minor (Black, Harker/Rafferty, Mallinson, Mulvihill, Sullivan): A Dorian (Breathnach). Standard tuning (fiddle). AABB. Composed by the late Clare fiddler Martin 'Junior' Crehan (1908-1998). In a 1980's interview with Crehan, Finbar Boyle asked him about the origins of the tune Crehan related that he and friends used to play by a stream associated with an otter den, and that cattle would come by and (according to Junior) be soothed by the music. The word holt is an archaic form (a phoentic variant of 'hold', generally from the English mid-lands), but is usually taken to mean a place of refuge or abode; an animal's den. There is an interesting connection with Paddy Killoran's "Old Dudeen," which shares some melodic material with Crehan's melody (see note). Andy Stewart's song "Take Her in Your Arms" (on Green Linnet SIF 1083, "Dublin Lady") is set to this tune. 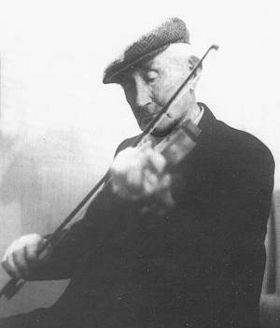 West Clare fiddler Martin 'Junior' Crehan.
The reel is similar to Paddy Killoran's "Old Dudeen (The)" in the first strain.

Back to Otter's Holt (The)