Find traditional instrumental music
This is the stable version, checked on 29 November 2021.
Jump to: navigation, search

Back to Our Highland Queen

OUR HIGHLAND QUEEN. AKA - "Oor Highland Queen." Scottish, "Pastoral Air" or "Solo Strathspey" (whole time). D Major. Standard tuning (fiddle). AB. "Our Highland Queen" is one of the six hundred or so compositions by the great Scottish fiddler-composer James Scott Skinner (1843-1927). Composed on the 10th of May, 1881, in honor of Queen Victoria and her love for the Scottish Highlands, the strathspey originally appeared in his Miller o' Hirn collection, published that same year. In 1858 Skinner, a fifteen-year-old violinist with the boy-troupe Dr. Mark's Little Men, performed before the Queen at Buckingham Palace, and ten years later he was a dancing master to the children of her tenants in her Highland vacation manor, Balmoral, Scotland. He included it as one of the tunes in his 1921 concert set romantically entitled "Warblings from the Hills." Skinner's directions say it should be played with "grandeur and expression." 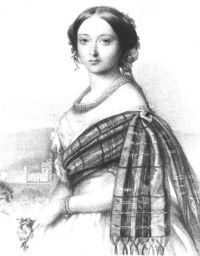 J. Scott Skinner
The manuscript copy by Gavin Grieg, prepared for Skinner's publication, has the following couplet pasted to the page:

The blue bell may forget to spring,
The Cold cease to blow;
But Deeside men can ne'er forget
The loyalty they owe.

Skinner solicited sets of words from northeast Scottish poets for a number of compositions in his Miller of Hirn Collection (a reversal of the usual practice of later setting music to verses already written). A poem called "Our Highland Queen" by R. Grant was printed in the collection, along with other poems inspired by his music. It begins:

Oor Highland Queen we welcome back
To Highland Dee, ance mair;
We fain wad keep her to oorsel's,
And ease her heirt o' care.
For cauld, cauld is the warld's love,
Leal love--a hamely flower;
The decks the bonnie banks o' Dee,
And smiles in queenly bower.

Back to Our Highland Queen