Over the Hills to Glory

Find traditional instrumental music
This is the stable version, checked on 7 June 2019.
Jump to: navigation, search

Back to Over the Hills to Glory

OVER THE HILLS TO GLORY. AKA and see "Lass o' Gowrie (1)," "Loch Erroch Side," "Loch Ericht Side," "I'm O'er Young to Marry Yet (3)," "Lakes of Sligo (The)," "Niel Gow's Second Wife (1)," "Rocky Road to Dublin (4)" (Pa.), "Tom Billy's Polka (2)." English, Schottische. D Major (Kennedy, Raven): G Major (Carlin). Standard tuning (fiddle). AABB. The melody is popular in England, Scotland and Ireland, and is rendered variously as a polka, schottische, fling etc., and sometimes even set as a jig. The title "Over the Hills to Glory" is English, and the tune may be a variant of "Old Mrs. Cuddledee/Old Mrs. Huddledee."

"Over the hills to glory" is a phrase associated with an incident in southern England. In 1873 sixteen women from Ascott-under-Wychwood were imprisoned for a short time for their part in forming an agricultural workers union, in helping to prevent "scabs" from replacing their men on the farm. Known as the 'Ascott Martyrs' the women garnered much public sympathy and quite a bit of press, before hastily being pardoned by Queen Victoria. A placard on the village green reads: "This seat was erected to celebrate the centenary of the Ascott Martyrs, the 16 women who were sent to prison in 1873 for the part they played in the founding of the Agricultural Workers Union when they were sent 'over the hills to glory'." 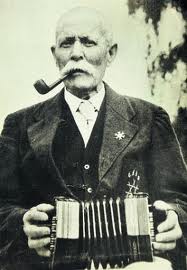 Back to Over the Hills to Glory