Over the Moor to Peggy

Find traditional instrumental music
This is the stable version, checked on 16 February 2020.
Jump to: navigation, search

Back to Over the Moor to Peggy 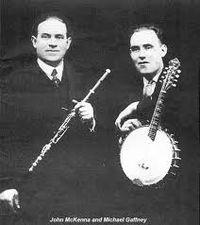 The tune was played by the great flutist John McKenna (b. 1880, Tents, Tarmon, County Leitrim) who recorded it in New York in 1925, accompanied by banjo player Michael Gaffney (b. 1896, Mullaun, Co. Roscommon). Despite being from different counties, they were in fact neighbors in Ireland, points out Reg Hall (1995), and only lived a mile from each other. Both emigrated to New York (in 1911 and 1915, respectively), where they paired to produce a number of successful recordings and to entertain in the Irish dance halls of the 1920's and 1930's. "Over the Moor to Peggy" is distantly related in the first strain to the family of tunes that includes "Ballina Lass," "Gearrchailiu Chontae Mhuigheo," "Hag's Reel (The)," "Johnny When You Die (1)," "Mayo Lasses (The)," "Old Maid of Galway (The)," "Paddy's Gone to France," and the Cape Breton variant "West Mabou Reel."

Back to Over the Moor to Peggy