OVER THE WAVES [1]. AKA – "Sobre las Olas." Old-Time, Waltz. USA; Ala., Ga., Ky., Pa., Mo., S.D., La., Arizona. C Major (Ford): G Major (Guntharp): G Major ('A' part) & C Major ('B' part). Standard tuning (fiddle). AABB (Guntharp): ABC (Phillips). A popular waltz that found a home in traditional fiddle repertory. One modern source maintained the tune was popular in Spain in the 15th century, while others attribute it to Strauss (The Waltz King); however, Charles Wolfe has determined it was written by Mexican composer Juventino Rosas [1] (1868–1894). Rosas was a pure-blooded Otomi Indian and a fiddler and violinist so accomplished that at age 15 he obtained a job as first violinist in a touring opera company. After a stint in the Mexican army, he wrote the tune in 1884 as a set of waltz's called "Sobre las Olas" (Over the Waves), which he and his band played to much popular acclaim at the worlds fair (the "World Cotton Centennial") in New Orleans that same year. The melody quickly entered old time tradition and was common in many parts of the country {Charles Wolfe, The Devil's Box, vol. 10, No. 3, September 1976}; in fact, musicologist Charles Wolfe calls it "one of the most popular fiddle tunes in modern history" (Devil's Box, Dec. 1982). The available literature supports this claim: for example, Arizona fiddler Kenner C. Kartchner said: "(Hearing the melody was) One of my first memories about 1893" (Shumway). Rosas performed again at the Chicago World's Fair in 1893 as well, and by that time his most famous composition, "Sobre las Olas (Over the Waves)," was famous world-wide. He died the next year in Cuba while on tour, but is remembered in Mexico as the 'Waltz King', where there is a town named after him.

Originally Rosas' tune had five parts, sometimes with an added introduction and extended coda, however, in traditional repertory it is almost always played as a two or three-part tune. It was also composed in the key of 'G', requiring position playing at the end of the first part (a key change to 'D' by fiddlers allows for first position playing). The tune was recorded for the Library of Congress by musicologist/folklorist Vance Randolph from the playing of Ozarks Mountains fiddlers in the early 1940's. It appears in a list of the repertoire of Maine fiddler Mellie Dunham (the elderly Dunham was Henry Ford's champion fiddler in the late 1920's) and was heard commonly in Georgia in the early 1920's. African-American fiddler Cuje Bertram of the Cumberland Plateau region of Kentucky recorded the tune on a 1970 home recording, made for his family. See also Narmour and Smith's unusual version of the tune recorded as "Winona Echoes." 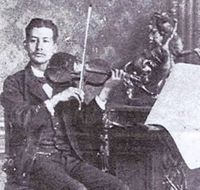 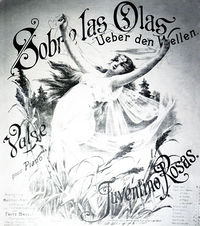