Back to Oxford Act[edit]

OXFORD ACT. English, Country Dance Tune (cut time). D Major. Standard tuning (fiddle). AABB. Country dance directions ("Longways for as many as will") and the tune were first published in London by John Young in the Second Volume of the Dancing Master [1], third edition (1718). Young was the successor to Henry Playford and continued to publish the long-running dancing master series. "Oxford Act" also was included in the fourth edition of Young's volume (1728) and in Walsh & Hare's Second Book of the Compleat Country Dancing-Master (London, 1719). Toward the middle of the 18th century it appeared in John Johnson's publication of dancing master Daniel Wright's Wright's Compleat Collection of Celebrated Country Dances (London, 1740) and John Walsh's The Compleat Country Dancing-Master. Volume the Third (London, 1749).

The 'Oxford Act' was the great occasion at Oxford University taking place each July, in which higher degrees (Doctors' and Masters') were conferred; it corresponded to Cambridge University's "Commencement." A.D. Godley's Oxford in the 18th Century (, pp. 186-187) explains (quoting liberally from Ayliffe's 1714 description): 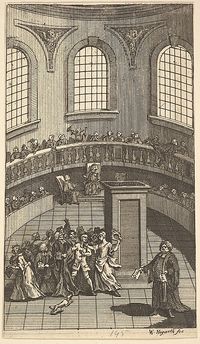 Frontispiece to Terrae-filius, Or, The Secret History of the University of Oxford (1726), by William Hogarth

It was a time of much solemn formality and many disputations: the 'Inceptors'--that is, Bachelors proceeding to the degree of Doctor or Master--disputed according to their kind of philosophy, divinity, law, or physic: in the Faculty of Arts, for which the Sheldonian Theatre was reserved, "The Senior Proctor opposes on all the Questions, and confirms an argument on the First: then the Pro-Proctor and Terrae Filius dispute on the Second: and lastly, the Junior Proctor on the Third Question: and all the Inceptors are obliged to attend these Disputations from the Beginning to the End, under Pain of 3s 4d. At the equal expense of all the Inceptors, there is a sumptuous and elegant Supper at the College or hall of the Senior of each Faculty, for the Entertainment of the Doctors, called the Act-Supper." All this takes place on a Saturday, and the above-mentioned exercises are called Vespers. On Monday, the various personages concerned repair to the Theatre, where 'Comital Exercises' are performed, very much as on the Saturday: Proctors and Terrae Filius playing the same part as two days before. Then, "if there be any person taking a Musick degree, he is to perform a Song of Six or Eight Parts on Vocal and Instrumental Musick, and then he shall have his creation from the Savilian Professors, etc." (the Saviliam Professor of Astronomy, in virtue of his presumed acquaintance with the music of the spheres, is still one of the electors to the Professorship of Music): then Doctors are created, and the Vice-Chancellor closes the Act "in a solemn Speech," and all assemble in the Congregation House, "where, at the supplication of the Doctors and Masters newly created, they are wont to dispense with the wearing of Boots and Slop Shoes, to which the Doctors and Masters of the Act are oblig'd, during the Comitia.

In 1733 there appeared the The Oxford Act, a ballad opera. "A crude and unamusing play, it is nevertheless interesting as containing the germ of modern musical comedy. The idea of the piece was to satirise university politics..."

Back to Oxford Act[edit]