OZARK WALTZ. Old-time, Waltz. USA, Arkansas. F Major. Standard tuning (fiddle). AA'BB'. "Ozark Waltz" was originally recorded in Memphis, Tennessee, in June, 1930, by the Morrison Twin Brothers String Band of Searcy County, Arkansas, featuring the twin fiddles of Abbie (1876-1965) and Absie (1876-1964, sometimes "Apsie") Morrison, who were themselves twins, backed up on guitars by Abbie's sons Claude and Lawson. The brothers got their break after a recording company representative hear them play in Little Rock. Guthrie Meade believes the tune might have been adapted from an air of a popular song from around the turn of the 20th century, and identifies an early recording by Earl & Joe (1930) in addition to the Morrison's. Drew Beisswenger (2008) notes that it is not played much in the Ozarks in modern times. 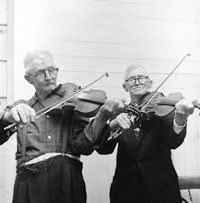