Back to Pádraig O'Keeffe's Slide (1)

PÁDRAIG O'KEEFFE'S SLIDE [1] (Sleamhnán Phádraig Uí Chaoimh). AKA and see "Pádraig Ó Caoimh." Irish, Slide (12/8 time). D Major. Standard tuning (fiddle). AA'BB. Pádraig O'Keeffe (d. circa 1964) was a near-legendary itinerant fiddler and schoolmaster of the Sliabh Luachra region, and "is remembered as a great stylist, much of which he passed on to today's best exponents of Kerry fiddle music" (Boys of the Lough). According to accordion player Johnny O’Leary, O’Keeffe “wouldn’t play without a drink. No way could he without a drink. Denis Murphy was different. He never wanted a drink, and so with Tom Billy. But the drink got the upper hand of Padraig like. But he was the best I’d say, ever caught a fiddle in his hand, no doubt about it.” 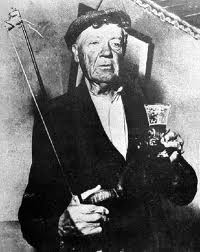 It was at a house dance hosted by an affluent family. Padraig O'Keefe, always fond of a drop, was disappointed by the scant amount and poor quality of the liquid refreshments offered to the musicians by their hosts. After playing a short while, he fell to the floor in a convincing imitation of a fainting spell, in the hopes that a stronger potation would be produced to assist in his revival. Sure enough, the host brought out a bottle of his best brandy and proceeded to minister to the stricken fiddler. Another local man, a notorious tippler and cadge, realizing what Padraig was up to, fell to the ground right next to him. Padraig opened one eye, and hissed to the man "Go off to another house, man, and get your own faint!"

A slide is a jig-style dance known mostly in the south west of Ireland: west Clare and Cork, and County Kerry.

Back to Pádraig O'Keeffe's Slide (1)