Find traditional instrumental music
This is the stable version, checked on 24 February 2022.
Jump to: navigation, search

PADDY CAREY [2] (Paidin Ua Ciarda). AKA - "Paddy Carrey," "Paddy Keary." AKA and see "Paddy Carrey's Fortune." Irish, English, Scottish; Air and Country Dance Tune (6/8 time) or Jig. England; Shropshire, Lancashire. C Major (Clinton, Hamilton, Haverty, Robbins, Sutherland): D Major (Ashman, Clinton, Kennedy, Kerr, O’Neill, Ross): G Major (Sumner). Standard tuning (fiddle). AB (Haverty): ABB (Clinton): AABB (Ashman, Robbins): AABBCC (Hamilton, Kennedy, O'Neill, Ross): AABBCCDD (Kerr, Doyle, Sumner). “Paddy Carey” or “Paddy Carey’s Fortune” was a song composed for the theatre in the late 18th century and popular for the next 100 years. It still has cachet as a dance tune. The The Lester Levy Sheet Music Collection has an undated set of the song, published by C. Taws, Philadelphia, entitled "Paddy Carey's Fortune or Irish Promotion, A favourite Comic Song." Words in that publication are credited to a “Mr. Cherry,” with music by “J. Whitaker.” The Mr. Cherry probably refers to and Irish actor named Andrew Cherry, who was popular on the London stage of the late 18th-early 19th centuries. Cherry was also a playwright and penned the words to the song “Bay of Biscay.” The melody entered tradition early: a version is contained in the 1780 music manuscript of Scottish musician John Fife (a microfilm copy of which is in the National Library of Canada). A broadside version of the ballad begins: 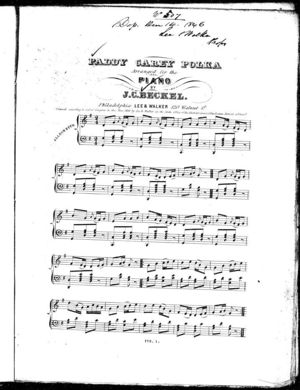 A polka version printed in Philadelphia in 1846.

‘Twas at the town of neat Clogheen,
That Sergeant Snap met Paddy Carey;
A cleaner boy was never seen,
Brisk as a bee, light as a fairy.
His brawny shoulders four foot square,
His cheeks like thumping red potatoes;
His legs would make a chairman stare,
And Pat was love by all the ladies:
Old and young, grave and sad,
Deaf and dumb, dull and mad,
Waddling, twadling, limping, squinting,
Light, brisk and airy.

The tune is sometimes paired in a medley with “Morgan Rattler” in southern England sessions. One of the oddest appearances of the tune is on the barrel organ from the polar expedition of Admiral Parry of 1819. In place of a ship’s fiddler (common in those days), Parry introduced a barrel organ on board ship to provide entertainment and a vehicle to which the men could exercise (i.e. by dancing). “Paddy Carey” was one of eight tunes on barrel no. 5, unidentified on the recording.