Find traditional instrumental music
This is the stable version, checked on 16 February 2020.
Jump to: navigation, search

Back to Pantheon Cotillion

PANTHEON COTILLION. AKA - "Grant's Rant (3)," "Pantheon (1) (The)." English, Country Dance or Cotillion (6/8 time). G Major. Standard tuning (fiddle). AABB (Wilson): AABBC (Aird): AABBCCDD (Stewart). The Pantheon is an ancient temple in Rome, constructed around the time of the birth of Jesus of Nazareth. It has been in continuous use since that time, and now serves as a church. There was considerable interest in the art and architecture of the classical world in England from the mid-19th century, given added impetus at the beginning of the 19th century with the acquisition of the Elgin Marbles [1] from 1801 to 1812, and their subsequent display in the British Museum. 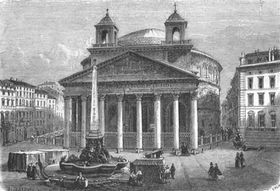 The Pantheon, Rome
However, the title for the country dance tune probably refers to a place of public entertainment on the south side of Oxford Street, London, England, also named The Pantheon. It was designed by James Wyatt and opened in 1772. The main rotunda was one of the largest rooms built in England up to that time and had a central dome somewhat reminiscent of the celebrated Pantheon in Rome. It was built as a set of winter assembly rooms and later briefly converted into a theater [Wikipedia]. 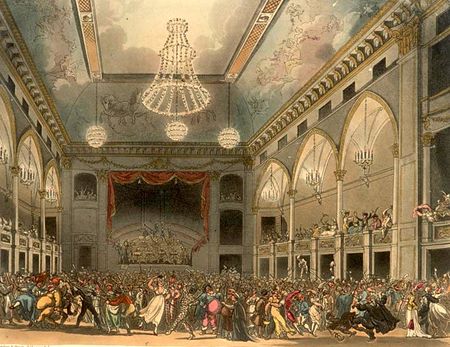 A masquerade at the Pantheon in Oxford Street, London circa 1809

"The Pantheon" was a very popular melody in the latter 18th century into the early 19th century. The melody also appears in Straight and Skillern’s Two Hundred and Four Favourite Country Dances, vol. 1 (London, 1775), Skillern’s Compleat Instructions for the Fife (London, 1780), and T. Skillern’s 'Complete Collection of Two Hundred and Four Reels…Country Dances (London, 1780). In addition to the Skillern publications, the jig was printed in Thompson and Son’s Complete Tutor for the English Flute (London, 1768), Charles and Samuel Thompson’s Compleat Tutor for the Fife (London, c. 1770), Longman and Broderip’s New and Compleat Instructions for the Fife (London, c. 1780), Neil Stewart’s Select Collection of Scots, English, Irish and Foreign Airs, Jiggs and Marches (Edinburgh, 1788), and Thomas Wilson’s Companion to the Ball Room (London, 1816), among others. In America, it appears in print in Joshua Cushing’s Fifer’s Companion No. 1 (Salem, Mass., 1805) and William Williams New and Complete Preceptor for the Fife (Utica, N.Y., 1819). Appearances of “The Pantheon” also appear in numerous musicians’ manuscript collections of the period on both sides of the Atlantic.

Back to Pantheon Cotillion