Back to Paps of Glencoe[edit]

PAPS OF GLENCOE, THE. AKA - "Pap of Glencoe." Scottish (originally), Irish; Pipe March (4/4 time). Ireland, County Donegal. A Mixolydian. Standard tuning (fiddle). AA’BB’ (Feldman & O’Doherty): AA’BBCCDD’ (Cranford). ‘Paps’ is an obsolete English word meaning breasts, but is sometimes used to describe rounded hills. The Paps of Glencoe is the name of the oddly-shaped prominence that dominates the village of Glencoe, Scotland, on the old Glencoe Road, in the area of Loch Leven. 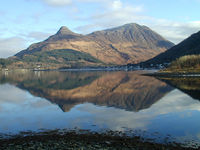 The tune, composed in the 20th century by the Scot William Lawrie [1], was popularized among Ulster fiddlers by the playing of John Doherty. William Lawrie (1881–1916) was born in Ballachulish, Argyll, the son of Hugh Lawrie, who gave him his first lessons on the Highland bagpipes. He is remembered as a composer for the bagpipes of piobaireachds, marches, strathspeys and reels, although only about twenty of his tunes survive. His most celebrated compositions include "The Paps Of Glencoe", "Clach Iarick" (Henderson's Stone, Glencoe), "John MacDonald of Glencoe" (perhaps the John Donald MacDonald who recorded the tune in 1930?), "Captain Carswell", and "Lament for the late Lord Archibald Campbell." "Battle of the Somme (The)" and "Inverary Castle". In 1914 he became Pipe Major of the 8th Argyllshire Battalion of the Argyll and Sutherland Highlanders and served with them in France from 1915 to 1916 when he became ill as a result of trench conditions. He was invalided back to Britain and died in the Third Southern General Hospital in Oxford. His bagpipes are now on display in The Argyll and Sutherland Highlanders Regimental Museum in Stirling Castle.

Back to Paps of Glencoe[edit]