PARACHUTE, THE. English, Waltz (3/8 time). A Major. Standard tuning (fiddle). AABB. During the years 1802-1803 there was a brief pause in the nearly continuous twenty-one years of war between France and England, allowing Londonders to get a glimpse of life in Napoleonic Paris. There was intense curiousity about French culture; dancing, society, and events. The Bland & Weller volume of country dances echoes that interest with several French-themed dances. The History Channel site [1] explains the wonder at the achievement of a French dare-devil: 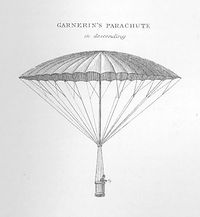 The first parachute jump of note was made [on Oct 22, 1797] by André-Jacques Garnerin from a hydrogen balloon 3,200 feet above Paris.

Leonardo da Vinci conceived the idea of the parachute in his writings, and the Frenchman Louis-Sebastien Lenormand fashioned a kind of parachute out of two umbrellas and jumped from a tree in 1783, but André-Jacques Garnerin was the first to design and test parachutes capable of slowing a man's fall from a high altitude.

Garnerin first conceived of the possibility of using air resistance to slow an individual's fall from a high altitude while a prisoner during the French Revolution. Although he never employed a parachute to escape from the high ramparts of the Hungarian prison where he spent three years, Garnerin never lost interest in the concept of the parachute. In 1797, he completed his first parachute, a canopy 23 feet in diameter and attached to a basket with suspension lines.

On October 22, 1797, Garnerin attached the parachute to a hydrogen balloon and ascended to an altitude of 3,200 feet. He then clambered into the basket and severed the parachute from the balloon. As he failed to include an air vent at the top of the prototype, Garnerin oscillated wildly in his descent, but he landed shaken but unhurt half a mile from the balloon's takeoff site. In 1799, Garnerin's wife, Jeanne-Genevieve, became the first female parachutist. In 1802, Garnerin made a spectacular jump from 8,000 feet during an exhibition in England. He died in a balloon accident in 1823 while preparing to test a new parachute.

See also "Garnerins Waltz" and "Aerial Flight (The)" from the same volume of country dances.