Find traditional instrumental music
This is the stable version, checked on 22 August 2020.
Jump to: navigation, search

Back to Parcel of Rogues (1) 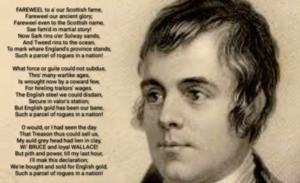 Robert Burns - Such a Parcel of Rogues in a Nation

PARCEL OF ROGUES [1]. AKA and see - Boyne Water (1), Cavalcade of the Boyne, King William's March, Rashes (The), Such a Parcel of Rogues in a Nation, When the King came o'er the water, Wee German Lairdie, Wha the Deil hae We Gotten for a King?. Scottish, Air. D Minor. Standard tuning (fiddle). AABB. Scottish poet Robert Burns fashioned famous words to the preexisting tune in 1791, and his song is published in Johnson’s Scots Musical Museum. Robert Chambers included it in his collection of Scottish Songs Prior to Burns. The lyric looks retrospectively to the Act of Union of 1707, in which the Members of Parliament for Scotland voted to join the two countries, abolishing the independent Parliaments of Scotland and England and created the Parliament of the United Kingdom. It was a traitorous act in Burns's view, who accuses them of acceding to English bribery. Many Scots were outraged then, and resentment has continued to this day over what is seen as Scottish independence usurped. Sir Walter Scott summed up the popular Scottish attitude of the time in the words of one of his characters:

I ken, when we had a king, and a chancellor, and parliament - men o' our ain, we could aye peeble them wi' stones when they werena gude bairns - But naebody's nails can reach the length o' Lunnon.

The debate continues as to just how much influence was actually bought, and whether or not the widely believed tale of bullying, bribery and betrayal has merit.

Fareweel to a' our Scottish fame,
Fareweel our ancient glory;
Fareweel ev'n to the Scottish name,
Sae fam'd in martial story.
Now Sark rins over Solway sands,
An' Tweed rins to the ocean,
To mark where England's province stands-
Such a parcel of rogues in a nation!

What force or guile could not subdue,
Thro' many warlike ages,
Is wrought now by a coward few,
For hireling traitor's wages.
The English steel we could disdain,
Secure in valour's station;
But English gold has been our bane-
Such a parcel of rogues in a nation!

O would, ere I had seen the day
That Treason thus could sell us,
My auld grey head had lien in clay,
Wi' Bruce and loyal Wallace!
But pith and power, till my last hour,
I'll mak this declaration;
We're bought and sold for English gold-
Such a parcel of rogues in a nation!