PARNELL’S MARCH. AKA and see "Julie's," "Micilín Conlon's," "Sweet Marie." Irish, March (6/8 or 12/8 time). G Major. Standard tuning (fiddle). AB. The tune was recorded by piper Joe McKenna under the title “Rowsome’s Jig(s),” referring to his teacher, Leo Rowsome [1], although Rowsome catagorized the tune as a 'march' on his 1926 recording for Columbia Records. Rowsome used the tune as one of his theme pieces for radio broadcasts in the 1950's and 1960's, notes Don Meade. 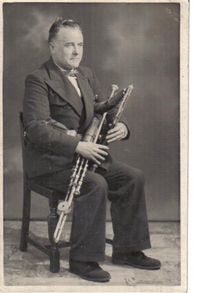 Harry Bradley informs the tune has a long association with the uilleann pipes, having been included in Tadhg Crowley’s 1936 pipe tutor (“published the same year as Leo Rowsome’s tutor; there hadn’t been a tutor for the pipes in over a hundred years and all of a sudden two fall out of the hat in the same year!”). He believes Crowley may have borrowed heavily from Highland Bagpipe repertoire, and thinks “Parnell’s March” may have had a pipe band association.

Sol Foster (Ir-trad 12/15/05) notices the tune has a strong resemblance to Newfoundland fiddler Rufus Guinchard’s tune “Uncle Manual Milks the Cow.” Foster says the title was invented by Guinchard, and that the tune “was just a nameless one floating around the northwest portion of Newfoundland in the early 1900’s.” The march has also entered tradition in England, from the influential recording by Northumbrian musicians Willie Taylor, Joe Hutton and Will Atkinson.