Parting of Friends (The)

Back to Parting of Friends (The)

PARTING OF FRIENDS, THE (Sgarúint na gCompánach). AKA and see "Conchubhar Mhac Coiréibhe," "A Chailini, an bhfaca sibh Seoirse." Irish, Air. E Dorian. Standard tuning (fiddle). AB. Considered to be an ancient melody, it is often played by harpers when the audience is about to depart, according to Paddy Moloney of the Chieftains, who got this information from Edward Bunting (1773-1843). Bunting also said: "...it is popular opinion that it was composed while the Irish groaned under the oppression of the Danes and were forced to conceal themselves in caverns and other sequestered places." O'Sullivan (1983) remarks that the tune is a variant of "Conchubhar Mhac Coiréibhe" (Conor Macareavy) as printed in Bunting's 1796 collection (No. 25). The title is also associated with O’Carolan’s “Lament for Charles MacCabe.”

Charlotte Milligan Fox, in her Annals of the Irish Harpers (1911, pp. 21-22) gives the following anecdote:

In 1795, Wolfe Tone with his family, came as a political fugitive to Belfast in order to embark there for America. Thence he was destined to pass to France, to launch three forces of invasion against England and finally to die in a condemned cell.

Passing through Belfast, he was entertained and cheered by former friends who rallied around him. Many delightful excursions were planned, the last of which was on the llth June, to Rani's Island on Lough Neagh. On the return of the picnic party to Belfast there was a final gathering, for it was now the eve of departure. Russell, Neilson, and the M'Crackens were present, and Bunting, whose collection was now well on the way to completion, was asked to play.

He chose an appropriate air known as " The Parting of Friends." It is recorded that the wife of Tone, though of the music, and, bursting into tears, left the room. Had they had power to see into the future, the music chosen was singularly appropriate, for tragedy loomed darkly over the future; for two there, the scaffold waited, for a third, death in a condemned cell.

What was the air played by Bunting is questionable. That published with the title of "The Parting of Friends," though sweet and pathetic, lacks the poignant grief of another with the same name, which lies buried in one of the musical note-books. It is also given the title of " An Cuman," or " The Bond," and there are Irish words for it; but among the manuscript poems there is only one quatrain bearing the title of " The Parting of Friends or the Scattering of the Company." It would peculiarly apply to the case of Tone, who had been courted in Belfast, then taken note of as a conspirator, and, finally, was separating from these conspirators with danger and death in prospect. 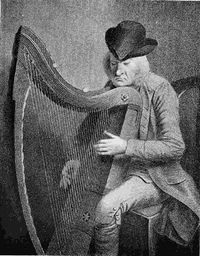 Charlotte Milligan Fox also mentions the air in another volume, Songs of the Irish Harpers (1910):

The Parting of Friends (tAir-Na Cumun). [This] beautiful and melancholy air was not published in any of Bunting's collections, but is taken down in one of his note books, with the title of " Na Cumun." or "Scarroon na Gompanagh " (we give his own phonetic spelling). This means "The Bond; or, The Scattering of the Company." There is added this note: "remarkable old, sings to M'Cabe's verses on Caralan." In another note wc are told of an air called " The Scattering of the Company ; or. Parting of Friends," which harpers were acccustomed to play at the end of a banquet or festival, and in his first volume Bunting gives us a quite different tune. brisk and graceful one with this name. It may have been that the sadder air was used on occasions when death hid taken place, or a prolonged parting was in prospect. Taking our choice of the different Irish words for this old air. we give the lament written by Cahal M'Cabe. a northern poet on the death of his friend. Turlogh O Carolan, Harper and Bard, which from Bunting's note we take to be the best for singing to it. The English version translates and expands a single verse of " The Parting of Friends," which is all that is given of that poem in Bunting's Manuscripts.

Back to Parting of Friends (The)