Find traditional instrumental music
This is the stable version, checked on 31 December 2020.
Jump to: navigation, search 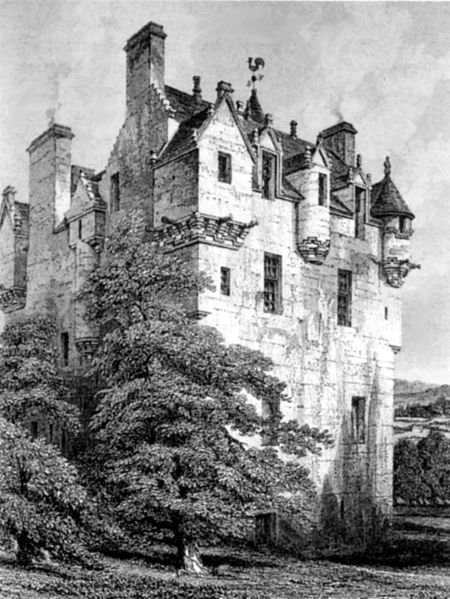 Castle Crathes, near Banchory, Aberdeenshire.
PAS SEUL [1]. Scottish, Country Dance Tune (2/4 time). C Major. Standard tuning (fiddle). AAB. A pas seul refers to a solo dance. Montrose and Aberdeen dancing master and musician Archibald Duff's title includes that it was "Danced by Miss Margaret Burnett of Leys." The Burnetts of Leys were one of the oldest land-owning families in Scotland, of Norman descent. Duff's title refers perhaps to Margaret Burnett of Leys (1796-1828), who would have been aged about sixteen when his collection was printed. Margaret was the daughter of Sir Robert Burnett of Leys, 7th Baronet of Crathes, and Margaret Dalrymple-Horn-Elphinstone, and married her cousin, Captain Thomas Ramsay in 1826 in Banchory, Aberdeenshire. She died only two years after her marriage, which often means a death from childbirth; their son, Thomas, was born in 1828, making this a likely conseequnce. Speculatively, it may be that the adolescent Miss Burnett was one of dancing master Duff's pupils, for whom he choreographed and arranged this dance. Duff used the popular forms of the day--airs, strathspeys, reels, country dances, etc.--for several Pas Seul's in his collection, all perhaps to showcase his well-to-do students' skills.

As with other pas suel sets in Duff's collection, the pas seul for Miss Burnett probably also included figures to the two tunes that directly followed "Pas Seul (1)" on the page, "Crazy Jane (3)" and the Irish "Slip Jig (10)." This set of three tunes and, presumably, three different dances had changing rhythms that would highlight the skills taught by Duff, although all three tunes are in the key of 'C'.

Duff was a successor to Aberdeen dancing master Francis Peacock, who, in 1805, wrote in his dance manual about music and movement interaction wherein he suggested that dancers combine movement motifs best suited to themselves and musical accompaniment. Duff's several "Pas seul" suites in his collection may indicate he subscribed to Peacock's point of view, with emphasis on the individual dancer's movements rather than specific dance figures. His dances are lost, but may have been a soft shoe, ballet-like dance, with the French title signaling the choreographic nature of the dance, rather than the known figures of a country dance, reel or jig that were not made for individuals.