Back to Pat Ward's Jig[edit]

PAT WARD'S JIG. AKA and see "Highlander's Kneebuckle (2) (The)," "Leather Buttons," "Galway Reel (4)." Irish, Slide or Single Jig (12/8 time). D Major. Standard tuning (fiddle). AA’BB’. See note for "Highlander's Kneebuckle (2) (The)" for information on the tune, which is variously played and noted in slide, single jig and reel versions. There is a brief biographical sketch and a photograph of Ward in Francis O'Neill's Irish Minstrels and Musicians (1913, pp. 317-319), giving his date of birth as 1847 in the Parish of Drumconrath, County Meath, remarking that he "had attained considerable command of the fiddle before commencing the practice of the Union pipes." 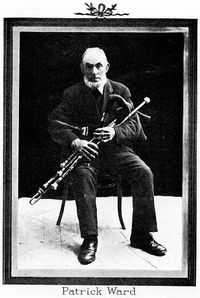 His first lesson in writhing music...was not unattended with difficulties. Having neither pen nor ink, he was told by his teacher, "a dark man," to burn a furze stick and write with its calcined end. This expedient served fairly well. From that day to his he says that whenever he takes a pen in his hand to write music his mind reverts to "Flogging Reel (The)", which was the first tune set down in the manner mentioned.

In his repertory are many tunes seemingly peculiar to the County Louth. He had played at several Feis Ceoil and Oirachtas for the last ten years and has been awarded several prizes. At the Oireachtas in 1907 he won second prize, the first going to George McCarthy, and in 1911 he again captured second honors. Taking into consideration that Ward is not a professional piper, but a plowman since early manhood, his execution on the double changer is indeed remarkable. [p. 319].

Seamus Ennis, in liner notes to his album "The Pure Drop," remarks:

As a child, I remember Pat Ward. He was a native of Drogheda, an old man with a crescent shaped beard. He played a double changer--two reeds, two bores and two stop holes for each finger, as compared to the usual single piece. I would compare his tone with that of a very mellow concertina, to the best of my recollection, for I was but a child when he was tragically killed by a motor-bus near his house. My father learned this tune from him and as he had no name for it we referred to it as above at all times. Notice that the accepted performing rhythm of the single jig is nearly identical with that of a hornpipe--a 'common' tune simulated by the four threes of 12/8.

More information about Ward was published in Treoir (Comhaltas Ceoltóirí Éireann) in a 1972 issue:

This account of Pat Ward was written by the Clones Piper, the late Jack Wade, who was killed in a car accident a few years ago. The manuscript was recovered by Pat McCabe of Clones. Pat Ward, Piper and Fiddler, was born near Drumconrath, Co. Meath in 1847. Both he and his brother, locally known as the "Dowser" were taught the fiddle by a man named Casey. On coming to Drogheda Pat became acquainted with both Billy Taylor of the Allys, Drogheda, and also with Nick Markey. Both were pupils of Taylor. Mrs. E. Dunne, Pat Ward's daughter, tells me that Billy Taylor's brother, Charlie, was a real pipe mechanic, although, of course, his brother also worked at the pipe making. Taylor was a very good piper and musician in general. When the old Piper's Club started in Dubl in and the Committee were finding great difficulty in finding a teacher it was Pat who put them on the track of Nick Markey, who by this time was working for the Great Northern Railway and had been transferred to Dublin. Another interesting story that Mrs. Dunne told me was that George McCarthy, who played a double chanter, arrived at Wards at the Blackbull with a second set of pipes which had been given to him by a man home from America on holiday. George was not very interested in keeping the pipes and so decided to sell them. They were a massive set of Uillean Pipes with double chanter made by Taylor. Pat Ward advised him to take the pipes to Dublin to the next competition and there he would have a good chance of getting a buyer. This he did and was eventually offered £25 for them by Mr. O'Mealy, Belfast [for whom see the hornpipe "O'Mealy's ]. After consultation with Pat, George decided not to sell and you may agree that £25 was a lot of money about 1911/12. In the course of a week or so Mr. O'Mealy wrote to George c/o Pat offering him £30 for the pipes, so George sold the pipes for this sum. Being fond of the bottle Pat knew what George would do with the £30 so he prevailed on him to put the money in the Post Office for a rainy day and Pat actually put the money in for him. How long it remained there is another story which I am unable to tell. Pat Ward had his portrait painted more than once and on one occasion it was on display in Grafton Street where Col. Cairns, Pat's boss and then Governor of the Bank of England, paid a special visit to see it.

It must be remembered that the Ward home was a half-way house for nearly all the pipers in Ireland and many of them called for a tune and to have reeds made by Pat who was a noted reed maker. Pat's big pipes with the double chanter, that is the one he has in the picture in O'Neill's Minstrelsy were given to his son Pat Junior, who went to America. Pat Junior played the fiddle and pipes like his father did. He died at the age of 69 years leaving no family behind him . All traces of his father's pipes were lost. Pat had a grand-daughter, Nancy, now Mrs. Gray, who plays the pipes (double and single chanters)' The pipes in Dunne's house now, which Pat played on in his later years were made by the Taylors. The regulators are of the ordinary wooden type but both the double chanters have flat brass keys and are 15" long. The chanter of the pipes is made of Cocas wood and is fully keyed with a brass valve. The other double chanter which is made of holly wood has one brass C natural key. There is also a 15" Egan single chanter fully keyed belonging to these pipes. Mrs. Gray was kind enough to lend me quite a lot of manuscripts with most of the tunes written by her father. Pat Ward was knocked down on the main road near his home in March, 1928, after he had returned from 11 o'clock Mass. He was 81 years and the man driving the car was also 81 years. He was taken into his own house and attended by the late Dr. Hunt, who sent him to the Cottage Hospital, Drogheda, where he died three days later. R.I.P.

Back to Pat Ward's Jig[edit]