Back to Pattern Day[edit]

PATTERN DAY, THE. Irish, Double Jig. A Major. Standard tuning (fiddle). AABB. Paul de Grae remarks the a ‘pattern day’ in Ireland refers to the custom of gathering at a holy well or similar place associated with a local saint. The term ‘pattern’ is a dialect for ‘patron’ as in patron saint. Pattern days are local holidays and times of socializing, music making and dancing in pubs. The custom is ancient. Sir Henry Piers attended a Pattern Day at a church on a hill overlooking Lough Derravaragh in County Westmeath in 1682, and recorded: 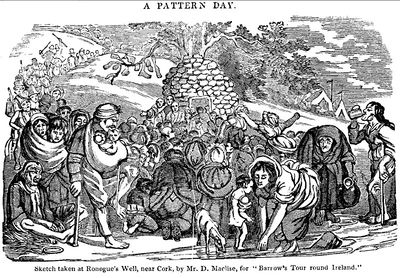 For ale sellers in great numbers have their booths here as in a fair and to be sure the merry bag-pipers fail not to pay their attendance. Thus in lewd and obscene dancing, and in excess drinking, the remainder of the day is spent as if they celebrated the Bacchanalia rather than the memory of a pious saint or their own penetentials; and often times it falls out that more blood is shed on the grass from broken pates and drunken quarrels when the pilgrimages are ended than was before on the stones from their bare feet and knees during the devotions.

The custom had hardly changed in 1834 when a Pattern Day at Maumean, Maamturk Mountains, Connemara, was visited by Henry Inglis. The holiday began well enough:

It fortunately happened, that on the second day of my sojourn at Ma’am, a very celebrated pattern was to be held, on a singular spot, high up amongst the mountains, on a little plain… on an elevation of about 1,200 feet… The ascent to the spot where the pattern was to be held was picturesque in the extreme, for up the winding way, for miles before us and for miles behind too, groups were seen to be moving up the mountainside—the women with their red petticoats, easily distinguishable; some were on foot, some few on horseback, and some rode double. About half way up, we overtook a party of lads and lasses, beguiling the toil of the ascent, by the help of a piper, who marched before, and whose stirring strains, every now and then prompted an advance in jig-time, up the steep mountain path.

Unfortunately, when the summit was reached and the poteen circulated words were exchanged and another fight broke out for a time until all settled down again. [both quotes from Eamonn Fitzgerald's Rainy Day blog [1] ].

Another set of this tune from southwestern Pa. was sent to Bayard (1981, No. 459, pp. 440–441) and appears as an untitled fife march. The tune was popularized among Cape Breton musicians through the playing of fiddler Winston "Scotty" Fitzgerald.

Back to Pattern Day[edit]