PAUL PRY. AKA and see “No Place Like Home.” English, Air (6/8 time). G Major. Standard tuning (fiddle). AABBCC. Paul Pry (1825), a farce in three acts, was the most notable play written by 19th-century English playwright John Poole. It premiered in London on 13 September, 1825, at the Haymarket Theatre and ran 114 performances, and the play continued to be popular until the early 1870s. So popular was the character that a 'Paul Pry' popularly referred to an excessively inquisitive person. 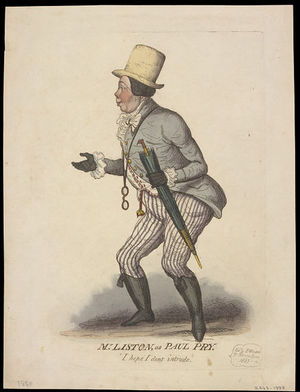