Back to Paul Ryan's Dream[edit]

PAUL RYAN’S DREAM. Irish, Jig. B Dorian. Standard tuning (fiddle). AB. From the playing of Donegal fiddler Danny O’Donnell. The title probably refers to New York Irish multi-instrumentalist Paul Ryan [1], according to the late New York button accordion player Jim Coogan. Ryan (b. 1913) played viola along with several other instruments, and apparently played viola on some of the last records New York/County Sligo fiddler Paddy Killoran [2] (1904-1965) made, for the Dublin label, on which Ryan played an octave below Killoran. (According to Philippe Varlet the label was founded by Killoran and Paddy Noonan, along with James O’Neill). He also journeyed with Killoran in 1932 to Ireland to attend the International Eucharistic Convention (see note for “Congress Reel (The)”). O’Donnell visited the United States and played with Killoran and Hugh Gillespie, and may have learned the tune through them. 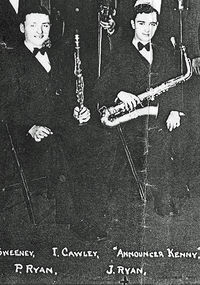 Back to Paul Ryan's Dream[edit]