Back to Peek-a-boo Waltz

PEEK-A-BOO WALTZ. American, Canadian; Waltz (3/4 time). USA; Arizona, Arkansas, Missouri, Alabama, Tenn., Virginia, New York. Canada, Prince Edward Island. D Major (most versions): G Major (Howard Marshall). Standard tuning (fiddle). AB (Silberberg): AABB (Phillips): AA’BB’(Perlman). Some have ascribed Swedish origins for this waltz which became popular in the United States in the early part of the 20th century, though Paul Gifford thinks this is unlikely and suspects it was in fact a 19th-century American composition. He believes that the similarity of “Peek-a-Boo” to a genuine Scandinavian tune, "Life in the Finnish Woods" (well-known to the Scandinavian population of the mid-west), is the reason for the confusion, but maintains this is a coincidence and that the tunes are not derivative or cognate. The tune, under the name "Svensk Anna's Vals," is popular with Scandinavian folk dancers. 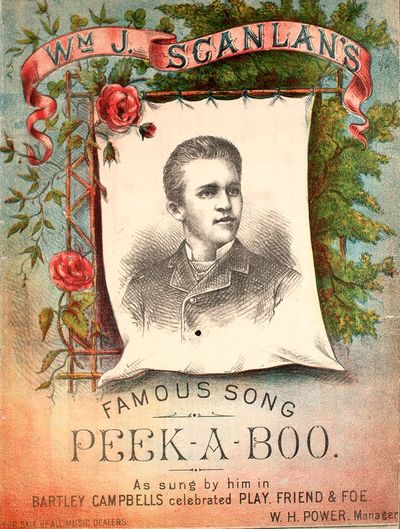 In fact, the waltz began as a song air, originally written and composed by William J. Scanlan (1856-1898), who published it in 1881. In the original, the verse is in duple time and the chorus is in waltz time. The words to the chorus are:

Scanlan was a singer who began his career as a child, and by his early teens was accompanying lectures at temperance meetings to sing hymns and provide a musical interlude between sermons. He toured the New England temperance circuit for seven years, until, at the age of 20, the bright lights and big city called him. Forming a team with an Irish comedian by the name of William Cronin, he performed on the early vaudeville stage, until finally he made it to Broadway. "Peek-a-boo" was sung by him in Bartley Campbell's play Friend & Foe. Scanlan was performing in another show, Mavourneen (which opened Sept. 28, 1891 in New York’s 14th Street Theater), when he began to show signs of mental instability, a condition which worsened through the autumn of that year, even though he continued to perform. His final break came on Christmas Day of that year, and on January 7th, 1892, he was institutionalized for reasons of insanity at the Bloomingdale Asylum in White Plains, New York, where he remained until his death six years later.

The melody was recorded by Uncle Dave Macon, and by fiddler J.C. Glasscock of Steppvile, Alabama, for Gennett Records in 1927, though the side was not issued. The title appears in a list of traditional Ozarks Mountains fiddle tunes compiled by musicologist/folklorist Vance Randolph, published in 1954. The waltz was in the repertoire of Galax, Virginia, old time fiddler Luther Davis. The song appears in Ira Ford’s Traditional Music in America (1940). See also the closely related “Svensk Anna's Vals.”

Back to Peek-a-boo Waltz