Peggy on the Settle

Find traditional instrumental music
This is the stable version, checked on 29 February 2020.
Jump to: navigation, search

Back to Peggy on the Settle

PEGGY ON THE SETTLE (Mairgreadin air an suideacan). AKA - "Pegg in the Settle." AKA and see "Drousy Maggie," "Kitty Clover's." Irish, Reel. A Dorian. Standard tuning (fiddle). AAB. A version of the reel was printed in Ryan's Mammoth Collection (1883) as "Kitty Clover's" twenty years prior to O'Neill, and although similar O'Neill's version is not identical to that in Ryan's Mammoth. Paul de Grae points out O'Neill removed the 'D' sharp notes from the tune in his later Dancy Music of Ireland (1907). Collector Frank Roche printed his version of the reel as "Drousy Maggie" in his 1927 collection (not to be confused with the more familiar "Drowsy Maggie (1)" tunes). See also the related first strain of “In and Out the Harbor.” "Boil the Breakfast Early" was listed by O'Neill as an alternate title for "Peggy on the Settle," but he also printed an unrelated reel of that title in his Dance Music of Ireland.

The 1911 edition of the Encyclopedia Britannica explains: "A settle is a wooden bench, usually with arms and a high back, long enough to accommodate three or four sitters." [1] 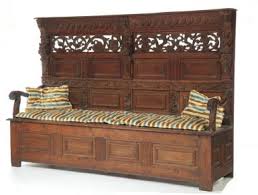 Back to Peggy on the Settle