PENNAN DEN. Scottish, Slow Air (4/4 time). D Minor. Standard tuning (fiddle). AAB. Composed by James Watt (1832-1909) of Pennan, at the time a tiny fishing village near Fraserburgh, North East Scotland, that clung to a strip of beach and harbor. Watt in his early years was a sailor and fisherman who later became a teacher in his village. He made some violins, but was more in demand as a dance-fiddler. He died in 1909 in Grangemouth where he had lived during the latter part of his life. Pennan was the location for the 1980's film "Local Hero," one of the last of actor Burt Lancaster's movies. 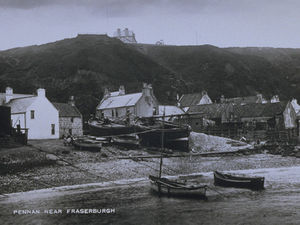