Back to Penny Wedding Reel[edit] 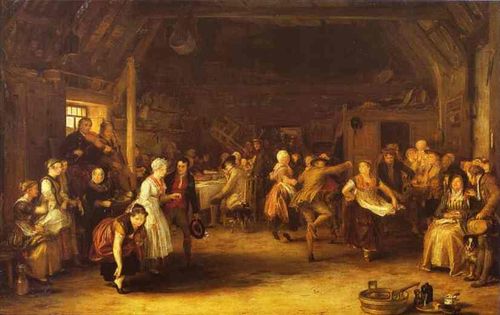 It was not an uncommon sight to witness from three to four hundred persons present at a penny wedding, enjoying themselves, alternately eating, drinking and dancing; and as every man paid for what he eat and drank, besides contributing his share towards the remuneration of the fiddlers, and as the ceremonies connected with the wedding lasted four days, the profits on the articles supplied to such large concourses of people were a great acquisition to young couples, who married for love and had little to begin the world with, putting thme in possession of a sum varying from ten to thirty pounds, according to the estimation in which they were held by their friends and acquaintances.

Back to Penny Wedding Reel[edit]