PENTLAND HILLS. AKA and see "Battle of Pentland Hills (The)." Scottish, Slow Air (3/4 time). G Major. Standard tuning (fiddle). AAB (Hardie): AABBCCDD (Johnson). Composed by violinist James Oswald (1711–69) of Dumfermline and published in his Caledonian Pocket Companion (1747–c.1769). Oswald lived variously in Edinburgh and, to the Scottish capitol's loss, from 1741 in London where he was a dancing master, singer, composer and music publisher. David Johnson (1984) thinks the air probably dates to the time of Oswald's Edinburgh years in the late 1730's. It also appears in Davie's Caledonian Repository (1829, 1850) and in Flores Musicae (where the title is, perhaps mistakenly, "The Battle of Pentland Hills"—there was a battle in those hills {at Rullion Green in 1666}, says Johnson, but the tune is clearly a pastoral air and not a battle piece). The air was set by classical composer Joseph Haydn (1732–1809), Pentland Hills Hob.XXXIa, nr.33, to words, the first two stanzas of which go:

When the bright god of day drove westward his ray,
And the ev'ning was charming and clear,
The swallows amain nimbly skim o'er the plain,
And our shadows like giants appear.

In a jessamine bow'r, when the bean was in flow'r,
And zephyrs breath'd odours around,
Lov'd Celia was sat, with her song and her lute,
And she charm'd all the grove with the sound. 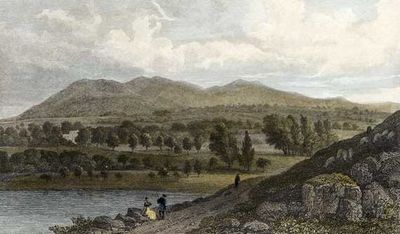 View of the Pentland Hills from Duddingston Loch by Thomas Shepherd. The loch is in Queen's Park, near the center of Edinburgh.

The Pentlands are a range of hills southwest of Edinburgh that were the locale for hunting and hawking in the days of King Robert the Bruce in the early part of the 14th century. J. Murray Neil (1991) anecdotally relates:

The story of the 'Pentland Deer Hunt' is described by Will Grand (FSA Scotland). Sir William wagered with King Robert that the two royal hounds, 'Help' and 'Hold', would kill a white deer, released for the dogs to chase 'before she crossed the March Burn in Glencorse valley or forfeit his life.' Fortunately St. Clair won the wager and 'in gratitude for his deliverance', he is said to have built the Church of St. Katherine-in-the-Hopes.