Find traditional instrumental music
This is the stable version, checked on 14 June 2019.
Jump to: navigation, search

Back to Percy Brown's Polka 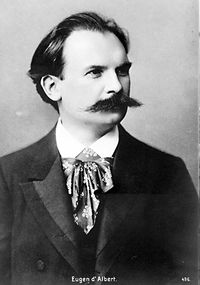 That same strain along with the third strain of "Percy Brown's" were composed by Charles d'Albert (1864-1932) as "King Pippin Polka." d'Albert was a Glasgow-born pianist and composer who was a student of Franz Liszt. The son of a French/Italian father and an English mother, D'Albert never spoke English fluently, and considered himself to be German, and became a naturalized citizen of Germany later in life. He composed 21 operas, a symphony, two piano concerti, and numerous lesser works.


See also listing at:
See/hear the tune being played on one-row 'C' melodeon on youtube.com [3]

Back to Percy Brown's Polka