Back to Pete's Breakdown

PETE'S BREAKDOWN. AKA - "Peas Breakdown." Canadian, Breakdown. C Major (‘A’ part) & A Minor (‘B’ part). Standard tuning (fiddle). AB. Composed by Edmonton, Alberta, fiddler Émilien "Pete" Couture (1903-1977). Couture was a college educated musician who studied violin in Winnipeg, followed by two years tutelage under Alfred Mergelin in Los Angeles. In addition to his various endeavors with his fiddle ensembles, he played with the Winnipeg Symphony Orchestra and had a popular broadcast on Canadian radio and TV. See also his compositions "Y'Aye! Y'Aye! Roll Your Own" and "À la main gauche." The strains of "Pete's Breakdown" are sometimes played reversed. 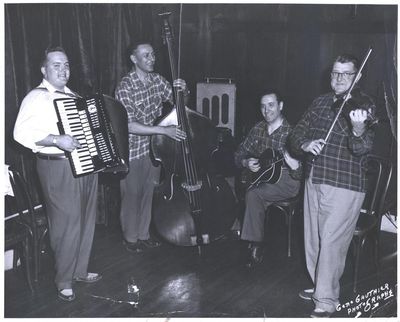 The version in the Portland Collection is in B minor and D, from the playing of Richard Forest. The Don Messer recording is in C and A minor, with the part in C first.