Back to Peter Francisco

PETER FRANCISCO. Old-Time, Breakdown. USA, North Carolina. D Mixolydian ('A' part) & D Major ('B' part). Standard tuning (fiddle). AB (Silberberg): AABB (Brody, Spadaro). The tune appears in George P. Knauff's Virginia Reels, volume II (Baltimore, 1839) in the key of F Major. It is known as a North Carolina tune, perhaps in part because Peter Francisco [1], who was from either North Carolina or Virginia, was a Revolutionary War legend whose deeds were widely celebrated. Francisco’s history is remarkable. It is probable that he began life as Pedro Francisco on July 9, 1760, born at Porto Judeu, on Terceira Island in the Portuguese-held Azores. He was either kidnapped as a boy, or was sprited away to the New World—no one is sure—but he eventually came to the attention of Anthony Winston, a local Virginia judge and uncle to firebrand Patrick Henry. Winston put the boy to work at chores around his 3,600 acre plantation of Hunting Tower in Buckingham County, Virginia, taught him English and guided his growth to manhood. His growth was prodigious: it is said he grew to six feet, six inches, nearly a foot over the man of average height in his day, and he weighed 260 lbs. He was as strong as he was large, performing legendary feats of strength throughout his life; yet he was also known for being good-tempered, temperate and charitable. 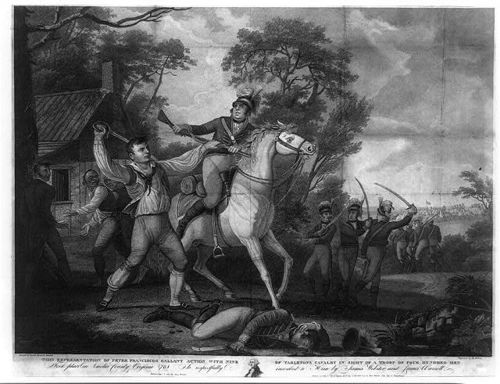 After hostilities broke out with England, Francisco at the age of 16 received Winston’s consent to enlist in the 10th Virginia Regiment as a private. He subsequently fought at Brandywine (where he was wounded), Germantown, Fort Mifflin, Monmouth (where he was again wounded), and Stony Point (wounded a third time). His three year enlistment being up in 1779, Francisco returned to Virginia. Soon, however, the active portion of the war shifted South, and Francisco joined Continental forces in the Carolinas, fighting in the disatrous defeat of the Battle of Camden under Gates, and the more successful action at Guilford Courthouse with Greene. He became the most famous enlisted man of the war. Benson Lossing reported in his 1850 Pictorial Field Book of the Revolution, that Francisco, "a brave Virginian, cut down eleven men in succession with his broadsword. One of the guards pinned Francisco's leg to his horse with a bayonet. Forbearing to strike, he assisted the assailant to draw his bayonet forth, when, with terrible force, he brought down his broadsword and cleft the poor fellow's head to his shoulders!"

Francisco was wounded a total of five times, but survived to attended the British defeat at Yorktown. After the war he worked as a blacksmith and continued his education, marrying several times after the death of each wife and fathering several children. In 1825 he was made Sergeant-at-Arms for the Virginia Legislature. He passed away on January 16, 1831. His shoes are preserved to this day at the Guilford Courthouse Battlefield, near Greensboro, N.C. (Fuzzy Mtn. String Band). Chris Goertzen, in his book George P. Knauff's Virginia Reels and the History of American Fiddling (2017, p. 61), points out that after the war Francisco lived in Buckingham County, Virginia, and ran a tavern in New Store, about fifteen miles from Virginia Reels editor George P. Knauff's home in Farmdale, Virginia, and only six or seven miles from where Knauff taught for a time at a women's preparatory school. Goertzen says that Francisco was thus a local hero, whose reputation remained strong in the region.

Back to Peter Francisco