Find traditional instrumental music
This is the stable version, checked on 24 August 2019.
Jump to: navigation, search

PETER WYPER’S [1]. AKA and see "Ferry Bridge Hornpipe." Irish, Hornpipe. D Major. Standard tuning (fiddle). AABB. Peter Wyper (1861-1920) was a well-known Scottish melodeon player who recorded in the early decades of the 20th century, and who had a melodeon tutor printed in his name. Wyper recorded this tune on a 78 RPM in 1910, paired with “Auld Robin Gray (1).” The tune appears on the recording “The Ring Sessions” with James Kelly and Zan McLeod, as an untitled hornpipe. 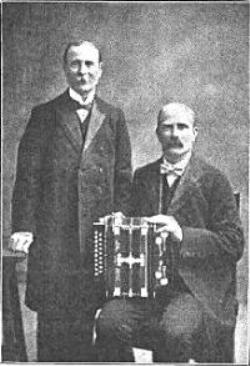 The Wyper Brothers
See note for "Ferry Bridge Hornpipe" for more on the provenance of this British/Irish tune.