Find traditional instrumental music
This is the stable version, checked on 29 March 2020.
Jump to: navigation, search 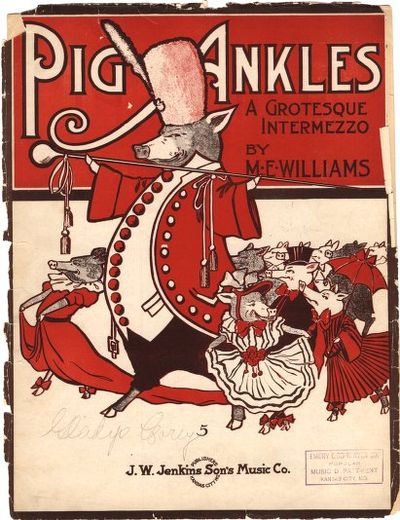 As "Pig Ankle Strut," it was recorded in the 78 RPM era by Gus Cannon's Jug Stompers (1928), the most famous of the Memphis Jug Bands. "Pig Ankle Rag" was popularized by Disney, Oklahoma, fiddler Uncle Dick Hutchinson and fiddler Ron Hughey (1914-1974), and seems to have enjoyed some regional popularity in the Ozarks in the mid-20th century (see also the variant "Pig Ankle Blues"). Hughey was originally from Missouri, but lived in California where he came in contact with the Sweets Mills group of musicians (Kenny Hall, Frank Hicks et al). It was also in the repertory of Grand Ole Opry stalwart guitarist Sam McGee (d. 1975), who said he had learned it from Slim Smith.