Find traditional instrumental music
This is the stable version, checked on 28 June 2020.
Jump to: navigation, search

Back to Pike's Peak

PIKE'S PEAK. AKA and see "Prosperity Special," "Rat Cheese Under the Hill." American, Breakdown. USA; Arkansas, Texas. C Major. Standard tuning (fiddle). AB (Silberberg): AABB (Johnson, Phillips, Songer). Recorded under the title "Pike's Peak" in 1933 by fiddler Ted Sharp and his band, whom Richard Nevins (1972) suggests came from central-eastern Arkansas. It had previously been recorded in 1930 by Clark and Luches Kessinger under the title “Rat Cheese Under the Hill” (a corruption of the tune name “Natchez Under the Hill,” although that title usually refers to a version of the venerable "Turkey on the Straw"). According to Paul Mitchell, both Ted Sharp and Clark Kessinger went into position playing on the violin for parts of the tune.

The "Prosperity Special" name for the tune comes from Texas fiddler and band leader Bob Wills' 1938 recording (later recorded by Clarence "Tater" Tate under that title). The title commemorates a unique event early in the 1920's. The Prosperity Special was a train, but a train made up entirely of locomotives. Early in 1921 during a post-war recession, the West Coast based Southern Pacific Co. placed an order for fifty heavy duty locomotives with the Baldwin Locomotive Works in Pennsylvania. It was a leap of faith in a poor economy, but the unprecedented order helped stir optimism and faith that the American worker would prevail. The locomotives were completed in 1922, and in May of that year half the locomotives (24) were shipped in an almost half-mile long train in a southern route to California. The event was heavily promoted. A large sign on the lead locomotive read "The Prosperity Special." 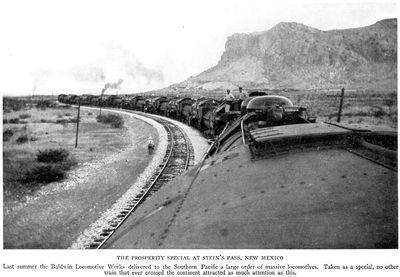 Back to Pike's Peak