Back to Pinkie House

PINKIE HOUSE. AKA and see "As Sylvia in a forest lay," "Fair Scotland! dear as life to me." Scottish, Slow Air. E Flat Major (Johnson-McLean): G Major (McGibbon, O’Farrell, Oswald). Standard tuning (fiddle). AABB. George Farquhar Graham (Songs of Scotland, 1853, p. 89) explains the air was anciently called "Rothes' Lament," although only the tune and title survived. The melody was printed in Thomson's Orpheus Caledonius (1733) as the vehicle for the song "As Sylvia in a forest lay," one of the first compositions of David Mallet. It should be noted that Farquhar's assertion about "Rothes' Lament" has been contended and that further information is required for an identification. Under the title "Pinkie House" it appeared in the fifth volume of Watts' Musical Miscellany (1731, pp. 174–175) wherein the melody is attributed to Queen Mary's tragic secretary, David Rizzo, to whom a great number of tunes are ascribed with little evidence. Allan Ramsay included it in his Tea-Table Miscellany (1724). A sonata based on the air "Pinkie House" was composed (around 1736–40) by Charles McLean and revised by Robert Mackintosh (c. 1745–1807) who, Pulver (1992) says, updated the genre in the 1770’s with new bowing styles and occasional harmonic experiments. It also appears in the 1740 MacFarlane Manuscript in drawing-room style, and in the [James] Gillespie Manuscript of Perth (1768). Johnson included it in his Scots Musical Museum under the title "Pinky House." The first stanza begins:

By Pinkie-House oft let me walk,
While circled in my arms,
I hear my Nelly sweetly talk,
And gaze o'er all her charms.
O let me, ever fond, behold
Those graces void of art,
Those chearful smiles that sweetly hold
In willing chains my heart. 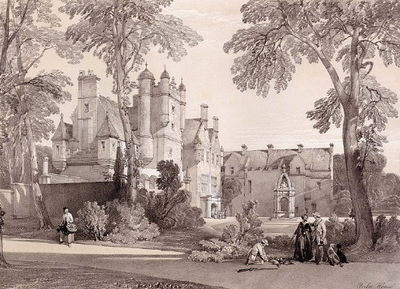 Pinkie House [1] is located in Musselburgh, on the east side of the River Esk. It began as a Medieval tower built in 1390 and was greatly extended in 1613 by Alexander Seton (1555–1622), 1st Earl of Dunfermline, for use as his residence. Pinkie House changed hands several times over the centuries and still exists as the site of a school, Loretto. It features the famous Painted Gallery, a 70 ft long chamber with a splendid painted wooden ceiling. The mansion was mentioned in Sir Walter Scott’s work Waverly (Chapter 49), and was the location of a ball for Bonnie Prince Charlie the night after the Battle of Prestonpans in 1745 (being then the residence of the Marquis of Tweeddale).

Back to Pinkie House