PIPER'S ROUND. English, Country Dance Tune (whole time). G Major. Standard tuning (fiddle). AB. The title probably refers to the piper as a town 'wait', a musician (or musicians) who was part of the municipal institution of a large town, who played at town functions and festivities and who signaled daily time for rising and turning in for the night. There were pipers who made rounds in the lowland Scotch towns of Dundee, Jedburgh and Lanark, where the piper's morning round started by official edict at 4 a.m. The commencement time of the piper's round varied; at Perth and Dalkeith the morning round began at 5 a.m., while the evening round could begin at 6 p.m. (at Lanark), 7 p.m. (at Perth), and 8 p.m. at Dalkeith and Jedburgh [Francis Collinson, The Bagpipe, 1975). The tune was first published in London by John Walsh in his Second Book of the Compleat Country Dancing Master, editions of c. 1735 and 1749. 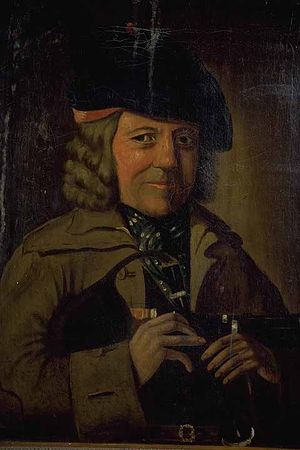 Said to be a portrait of James Livingstone, the Haddington Town Piper in the mid-18th century. He was a former soldier and was reputed to have fought at Fontenoy (1745).